On a Wednesday night, earlier this month, the entire Georgetown Hoyas basketball team donned the now familiar "I Can't Breathe" t-shirts during warm-ups of their nationally televised game versus Kansas.

The message seemed clear. The Hoyas were joining the nationwide protest against police brutality and concurrent judicial inaction in the wake of the deaths of Eric Garner, Michael Brown and Trayvon Martin.

However, even as they seemingly take a stand, athletes have been apt to tread lightly. 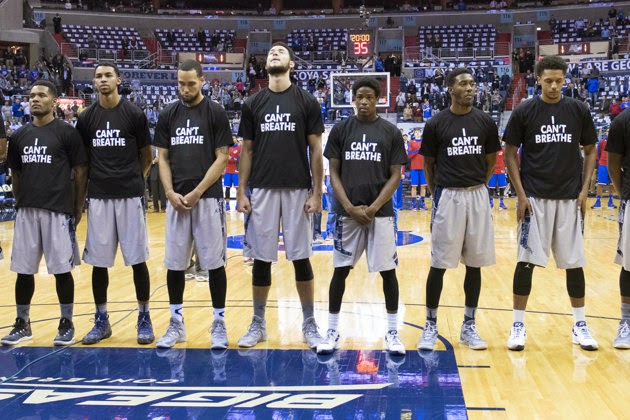 After the game, Georgetown senior Josh Smith followed LeBron James's lead from two nights earlier. Smith painstakingly pointed out that he was not making a statement against the police, not picking sides, but rather, simply supporting the family of Eric Garner.

What struck me about Smith and James's caveat was the reluctance of athletes, both professional and amateur, to say or do anything that could be considered politically or socially controversial.

What are they afraid of?

Of course, there is that long talked about specter of disparaging one's reputation, or "brand." This is the old Michael Jordan, "republicans buy sneakers, too," argument, or a fear that pissing off a certain percentage of your "fans" will be detrimental to your career and livelihood.

But, throughout recent history we have seen athletes prosper after such heinous acts or allegations of rape, murder and domestic violence.

Speaking out about a political or social issue of importance can't be that bad, can it?

There is also this narrative propagated by the professional leagues and much of the public that states: playing professional sports or college athletics is not a right, but a privilege.

While the "not a right" part may be correct, calling it a privilege seems disingenuous.

The only privilege I see is the privilege of being super talented.

The point is, if you are really good at sports, you can prosper and certainly survive some people disagreeing with your opinion, however controversial.

Though, I struggle to find controversy in the opinion that unarmed individuals, as a rule, should not be killed by protectors of the peace. Just as there is no controversy in stating that the murder of a police officer is a heinous act.

When it comes to college athletes, like the Georgetown team, it makes even more sense to express opinions on political and social issues. This is one of the purposes of college and higher education: to develop young minds and critical thinkers.

When a reporter questioned Georgetown Coach, John Thompson III, about their pre game statement, his father, the legendary John Thompson II interrupted the press conference. "It's a [expletive] school, man. This ain't no professional team."

Although crudely put, he was right on.

In college, it is actually the responsibility of the coach to discuss and help student athletes think through world issues. The college coach is a teacher of young men, afterall.

Another perplexing aspect of athletes' reluctance to speak out is that there doesn't seem to be any push-back from the media.

Members of the majority white sports media that I have heard speak on the subject have been unanimous in their acceptance of athletes expressing their opinions on subjects important to them. Many in the media almost seem to long for more of it.

It is doubtful this acceptance existed in the volatile 1960s, when out-spoken athletes, such as Muhammad Ali, Jim Brown and Bill Russell, risked much more than their brands by speaking out against injustice similar to what has taken place recently.

The tragic incidents between the police and minorities that have recently grabbed national attention are nothing new. In New York alone, it seems like we go through this once every couple of years. A black or hispanic person is killed in a police shooting, there is immediate uproar and protest, things eventually calm down, two years later there's another police shooting, and the cycle continues.

A majority of professional athletes and a large portion of college athletes are minorities who come from communities where tension with police is a way of life. These athletes know as well as anyone the potential danger involved in a confrontation with police. Thus, there may be no better spokespersons on the subject.

So, I commend the Georgetown men's basketball team for deciding to make a statement, just as I commend Lebron James, Kobe Bryant, Derrick Rose, the St. Louis Rams 5, and countless other sports figures who have done the same.

I just hope it continues.