Whitehead, who was playing at Seton Hall this time last year, easily eclipsed his career high in minutes, playing 46. The rest of his stat line looked pedestrian on paper – 6 points, 3 rebounds, 4 assists – but he had zero turnovers, while playing the point guard position and guarded Chris Paul for pretty much the entire game.

At Lincoln high school in Brooklyn and then at Seton Hall, Whitehead was known as an alpha dog rugged, do-it-all guard who looked to score. Early in his NBA career, he is showing he can do whatever is asked of him. 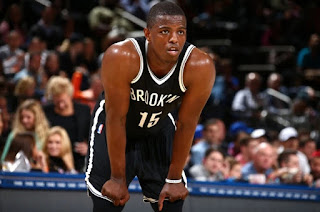 “I’m just playing my role,” he said after the game. “When coach tells me to be more aggressive then I’ll be more aggressive, but right now I think my job is really just to play defense and when I have an open shot, take it.”

He is doing a great job in his current role, which should only grow with each solid performance.

“[Tonight’s game] definitely gave me a lot of confidence, just because of the way I played,” Whitehead said. “I think I played some good defense, I think I really helped my guys on defense, I mean, I think I just did a great job on that side, so it’s definitely giving me more confidence.”

Expect bigger and better things to come from Isaiah Whitehead.
Posted by Jamal Murphy at 8:48 PM No comments:

It’s officially that time, the start of the college basketball season. In honor of this wonderful occasion, I bless you with my preseason NCAA Tournament bracket. Take it to the bank!

WARNING: The predicted field/seeding is highly likely to change from day to day or minute to minute.

Posted by Jamal Murphy at 3:53 PM No comments: