Brooklyn and the Barclays Center have quickly become a hotspot for college basketball.

This year, teams such as Duke, Virginia, Villanova, VCU, Michigan, Oregon, Stanford, UNLV and Temple have traveled to the borough of Brooklyn for key non-conference match-ups.

The latter featured two teams from the Bronx that have struggled to varying degrees. Manhattan (4-7) from the MAAC took on Fordham (3-6) from the Atlantic 10.

Manhattan and coach Steve Masiello have struggled to get it going this season, after making the NCAA Tournament last season and putting a scare into Louisville in the first round. The Jaspers' three wins coming into Monday night's game were against three of college basketball's lesser outfits, whose combined record is 4-33. Luckily for Manhattan, Monday's game was versus another such opponent.

There were unusually high expectations for Fordham this season, after they secured one of their biggest freshman signings in many years, nabbing Eric Paschall from Dobbs Ferry, NY. They also expected a major contribution from sophomore, Jon Severe, after his stellar freshman season. However, Severe left the team indefinitely due to a family issue, and while Paschall has lived up to the hype, he has struggled a bit due to a lack of help around him.

Manhattan took full advantage Monday night. The Jaspers pressured Fordham for the entirety of the game and double-teamed Paschall in the half court to get it out of his hands. Paschall was held to 7 points on 2-8 shooting, as Manhattan coasted to a 71-57 victory. The Jaspers were paced by Emmy Andujar's 14 points and 9 rebounds.

In the nightcap, Miami and Providence, two teams with NCAA Tournament aspirations, bumped heads in a spirited contest.

Both teams have been up and down early in the season.

Providence started strong, winning their first six games, including a neutral court win over Notre Dame, but hit a major road block in Lexington, losing to #1 Kentucky. Though the Friars were actually competitive with the Wildcats for most of the game, the loss, as well as some nagging injuries, seemed to have a residual affect. Providence suffered back-to-back bad losses to Boston College and Brown. However, Ed Cooley's squad regrouped and had won three straight entering Monday's match-up with Miami.

Miami's season has been similar. They won their first eight games, including wins at Florida and over Illinois. But, in their next three games, they lost two inexplicable home games by double-digits to Green Bay (68-55) and Eastern Kentucky (72-44). So, Miami came into Brooklyn looking to right the ship.

Providence would have none of it. 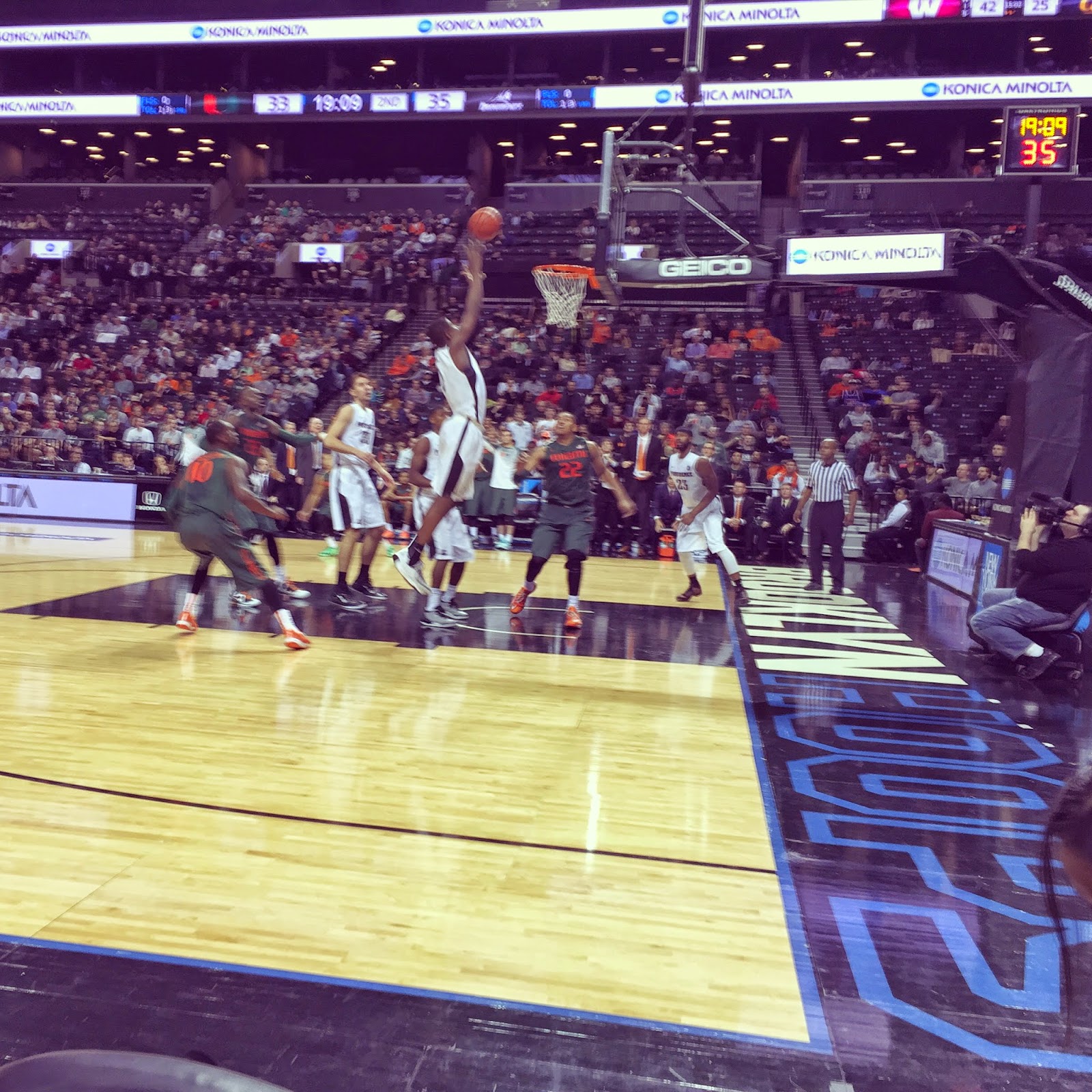 The Friars, led by the playmaking of Kris Dunn, jumped out to an early 21-12 lead midway through the first half and maintained a 9-point lead until the 4:20 mark. But, Miami fought back, behind solid play from Angel Rodriguez, and tied the game on a Shelden McClellan bank shot at the halftime buzzer.

In the second half it was all Friars. They scored the first eight points of the half and never looked back. LeDontae Henton, Providence's leading scorer, took control. He scored on drives to the basket, drilled perimeter jump shots and took advantage of Miami's lax transition defense, scoring on numerous fast break opportunities.

The Friars had a balanced offensive attack with four players scoring in double figures, led by Henton's 25 points and Dunn's 15 points along with 13 assists.

Coach Cooley was pleased after the game.

"I thought our leaders were big-time tonight." He would not go so far as to concede Monday's game was their best performance so far this season, citing the sloppy way they ended the game.

Best game or not, it was a wonderful performance from the Friars that will likely pay dividends down the road in March when the Selection Committee starts looking at resumes. Not to mention, the confidence and momentum a game like this provides, heading into Big East Play.

For Miami, a season that started so brightly, now looks daunting as they head into ACC play having lost three of four.