As we all know, the Knicks have been a disaster (to borrow a phrase from Donald Trump) of late. The Knicks came into Saturday night's game vs the lowly Phoenix Suns (15-29) with a 19-25 record, having won only three of their last ten games.

The Knicks continued their losing ways Saturday, falling to the Suns in excruciating fashion, 107-105.

Here are some Knicks takeaways from the game: 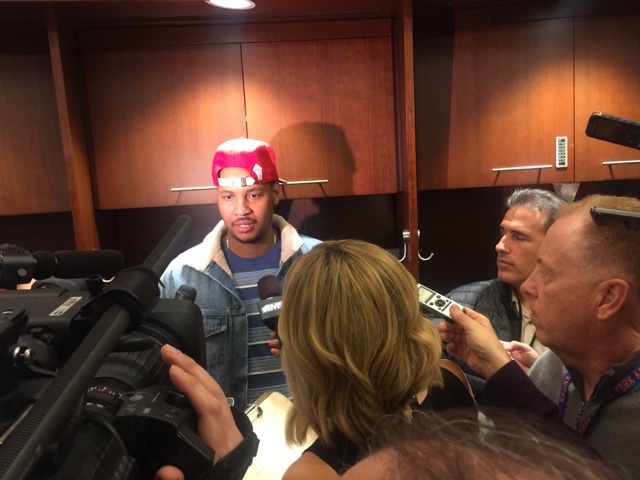 • After Carmelo Anthony's game-winning three-point attempt rolled around the rim and out, Anthony was consoled by a young fan with a pat on the back and what appeared to be some kind words, but Anthony couldn't recall what the fan said: “I was zoned out and trying to relive that play and relive that shot. It was a tough one to see not go in.”
• Anthony actually played a great all around game, scoring 31 points on 9/17 shooting to go along with seven rebounds and a team-leading six assists. The crowd seemed restless with Anthony throughout, however, often becoming audibly antsy if he took more than two dribbles in the half court before passing. It looks as if the fans have followed the New York media’s directive, as far as creating the “Melo-ball-stopper” narrative, despite Anthony's recent willing and effective passing. It is no secret that much of the sports media have little love for Anthony. When it came to NBA All-Star voting, among Eastern Conference front court players, Anthony ranked sixth in player voting, sixth in fan voting, and haterific 12th when it came to the media. Hmm...
• Kristaps Porzingis started off the game pretty passive, but became more aggressive in the second half. He seems to be trying to get back in the flow after dealing with the Achilles injury.
• Derrick Rose played well offensively, despite missing 14 of his 26 shot attempts. However, he continues to battle the referees who do not seem to be giving him the calls he deserves. Rose looked visibly distraught on a couple of occasions where the referees refused to blow the whistle, though he denied that he takes it personally after the game. “It just makes me better, makes me play more efficient,” he said in response to whether the lack of respect from referees was starting to frustrate him.
• Ron Baker continued to get meaningful minutes, as he played much of crunch time. Baker provided a solid defensive effort, which has been hard to come by on the Knicks’ roster this season.
Posted by Jamal Murphy at 9:03 AM