Food For Hot Take: Underwood Shows Mid In Mid-Major Refers To Money Only.

What a difference a few days make.
After beating West Virginia in the first round of the NCAA Tournament on Friday in Brooklyn, Stephen F. Austin coach Brad Underwood genuinely sounded like a man not just happy to be the coach at SFA, but a man grateful to be at a so-called mid-major program. 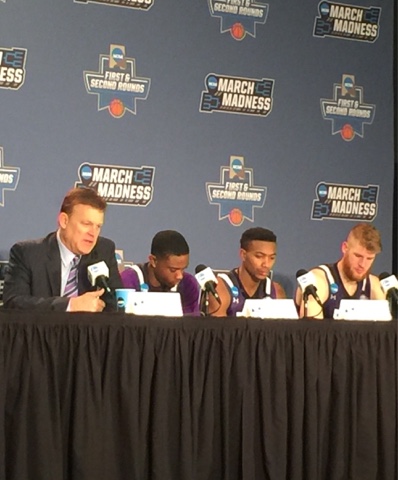 “[Mid-majors are] able to get better players [than in the past] and keep them for their career and have seniors, so there’s maturity,” Underwood said.
“One of the biggest discrepancies in college sports is the difference between an 18-year old freshman and a 22-year old senior. The maturity level is drastically different.”
After Stephen F. Austin’s heart-breaking second round loss to Notre Dame on Sunday, Underwood remarked that “the name [on the uniform] doesn’t mean anything. Stephen F. Austin is here to stay.”
Well, if that’s true, SFA will have to do so without their 89-14 head coach, who bolted Monday for more money, higher stature, and likely, perpetually younger and less mature players, at Power 5 school Oklahoma State.
I am definitely not blaming Underwood, but it illustrates what the “mid” in mid-major truly refers to. It’s no longer talent, great coaching, or good basketball teams.
It’s money.
Posted by Jamal Murphy at 7:05 AM